Toledo Villa FC is happy to formally announce the coaching staff for the 2021 season.  Brought on board for the 2020 season, Matt Johnson is returning as the Head Coach.  COVID-19 forced our former league, the National Premier Soccer League (NPSL), to cancel the 2020 season, denying Johnson his first opportunity to lead the team in a competitive match.

Johnson first came to the Toledo area after taking charge of Lourdes College men’s soccer program in 2019.  He led the Grey Wolves to 6-12 record in his first season.  2021 has shown that his groundwork is starting to bear fruit, as the Grey Wolves have a 9-7-1 record during the regular season this spring. He also has served as the head coach of Ann Arbor FC who were formerly in the United Premier Soccer League (UPSL).

Returning alongside Johnson on the staff is his assistant at Lourdes College, Nick Smith.  Smith is originally from the Monclova area, having played at Anthony Wayne HS.  He went on to play collegiately at Bridgeport College.  Alongside his Lourdes duties, he coaches at Royal Oak FC youth club in Detroit. 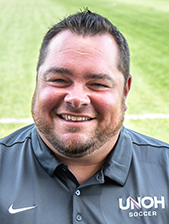 New on the staff in 2021 is Tyler Brock who will be an assistant coach.   Brock has been the head coach of the University of Northwest Ohio (UNOH) since 2017, and has compiled a 50-16-9 overall record.  Prior to his tenure at UNOH, he coached at Union College where he led the Bulldogs to a  143-122-24 overall record.   Alongside his duties at Union, he served as an assistant coach for two years at Knoxville Force of the NPSL.

The coaching staff will get their first taste of USL League 2 action May 15 versus the 2019 USL League 2 champions Flint City Bucks.

Toledo Villa FC and The United Soccer League (USL) announced Toledo Villa FC as the latest club to join USL League Two. The club will compete in the Great Lakes Division beginning in the 2021 season.

Founded in 2017, Toledo Villa FC’s vision of placing the best product on the pitch, developing players that are committed to upholding the traditions of the game, inspiring young athletes for the future of the game and provide a model business that positively impacts the community aligns directly with League Two’s emphasis on player development and community engagement.

Matt Johnson and Nick Smith will be continuing their roles as Head Coach and Associate Head Coach, respectively.

In joining League Two, Toledo Villa FC will offer a proven pathway to professional soccer for its players. A word from USL League Two Vice President Joel Nash, “We’re delighted to welcome Toledo Villa to League Two, and I look forward to seeing the continued growth of this excellent organization, I’m confident that the League Two platform will be a valuable resource for the club as it works toward raising the profile of the sport in its region and having a positive impact on its community.”